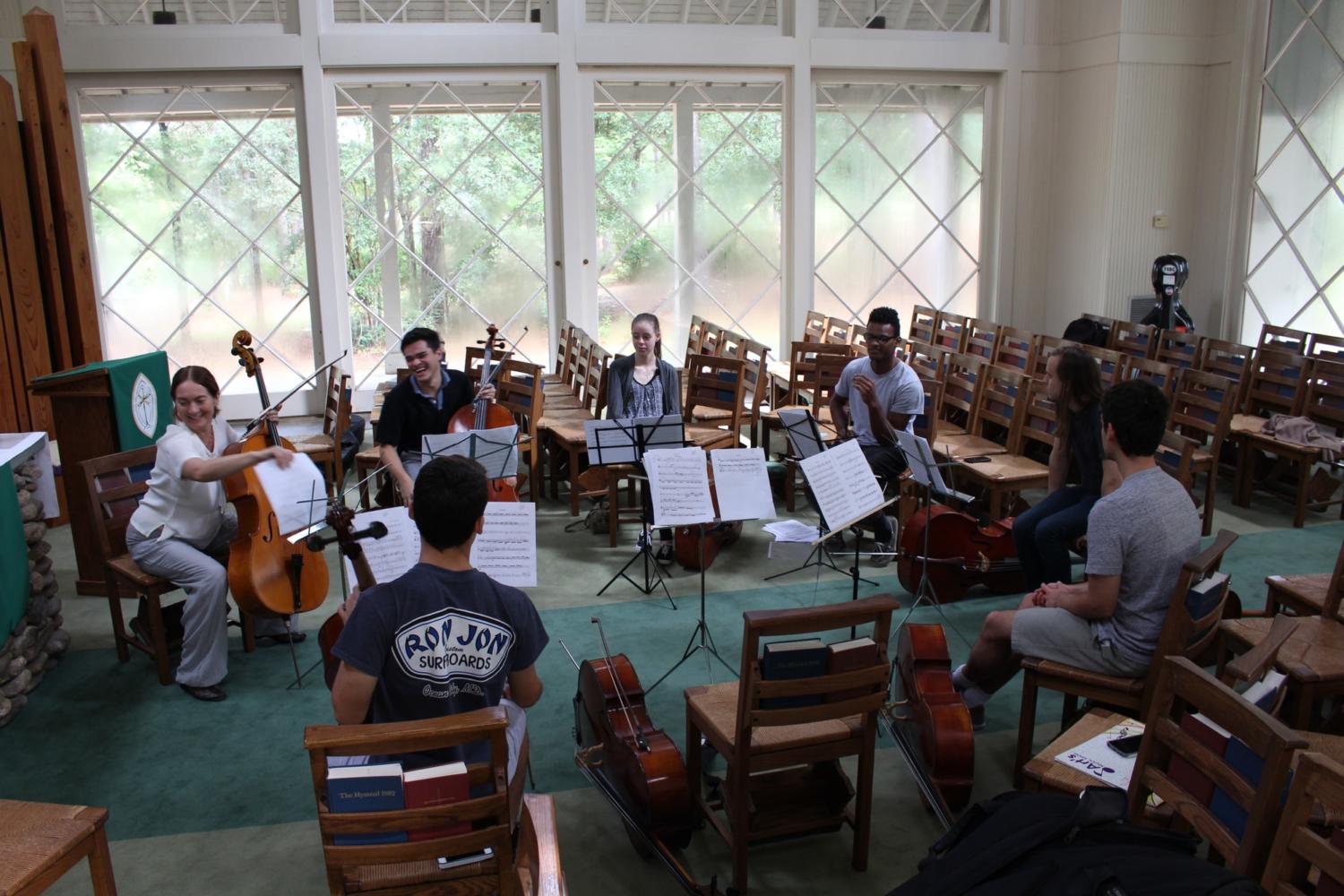 Article/photo by Anna Knapp
September 26, 2017
This aritcle appeared in The Maroon

Among the birds and wildlife in Loranger, Louisiana, visitors heard music played by the Loyola cello section. Over last weekend, the student cellists retreated to the Solomon Episcopal Center for the first cello boot camp. The retreat focused on improving and working together with Tanya Anisimova, who teaches at the Moscow Conservatory.
The retreat was meant to bring students to focus on their cello goals. Jean Montes, associate professor and director of orchestras, has come to the center for seven years and had hopes of connecting the university students with the place.
“I think it would be a great tool for university students to have access to,” Montes said.
He has been considering doing this for a while because he wants to see students connect with themselves and explore their potential.
“I think as musicians we are always seeking for a place to feel at peace and feel at harmony with ourselves so we can express ourselves,” Montes said. “It is very difficult to find that place.”
Anisimova praised the new program implemented by Montes.
“I think it is organized beautifully because we have done a lot of things. So even though it is hard work, it still feels like a retreat,” Anisimova said.
Not only did students rehearse, but they also grew together as a team.
“I think it was a really nice way for us all to be able to spend some time getting to know each other’s playing really well and becoming really unified as a section and bonding as people,” Emily Alves, music performance junior, said.
While at camp, students experienced a teacher not every university student encounters. Students were eager to go to the camp, because of the high level of teaching from Anisimova.
“Dr. Anisimova teaches with such generosity, and she makes you feel welcome to try, even if that means making mistakes. She welcomes that, because that’s how you learn,” Danley Romero, music performance junior, said. “I met Dr. Anisimova before, and I knew it would be a great experience because she is a phenomenal cellist and a great teacher.”
Anisimova helped students with their solo pieces and questions they had about playing.
“She actually helped me find a way to play with better technique,” Joshua Sierra, music performance junior, said. “I normally tend to tense up, but she helped me better figure out how to use both hands and body to play a passage correctly.”
Anisimova’s goal was to make the students harder workers and to become more enthusiastic about playing cello.
“I wanted them to become more reassured within themselves that they are good, because they are,” Anisimova said.
The Bach seminar consisted of the Bach cello suites. Each student picked a movement from the suites to play for her.
“Bach is the bible of classical music,” Anisimova said. “If you get a good sense of Bach, if you are really good at playing Bach, then everything else seems easy.”
In addition to the learning, the retreat also helped students relax by surrounding them in a peaceful environment.
“The center is beautiful with the fog and the rain. The acoustics were amazing and it was beautiful with all the scenery,” Alves said.
While at camp, they rehearsed a piece written by Anisimova, called “The Teacher.” It was inspired by her first teacher who now lives in Mexico City at 80 years old. There is a melody in her composition that is a Russian folk song named “The Red Robe.” It was one of Anisimova’s first pieces she worked on at seven years old with her teacher, Zoia Kamusheva. The students had five rehearsals to get the piece together.
“The improvement was every minute we worked,” Anisimova said. “I think they are amazing.”
The group performed a free concert on Monday night in Roussel Hall, where Anisimova performed the first Bach cello suite and ended with the students playing “The Teacher.”